3 Must-Haves for Your Kitchen Over the past few years, I’ve learned to love cooking even though I’ve had just as many cooking “fails” as I’ve had successes. Last week, I attempted a new baked fish recipe that I’m pretty sure our two dogs wouldn’t even touch … and they eat twigs and leaves. But, for every kitchen flop, there’s an opportunity to learn, tweak and try again. And I’ve learned that a few kitchen staples can make even a cooking novice feel like a pro. I’ve been sucked into clever marketing in the past when it comes to cooking gadgets; who among us doesn’t have a Panini maker or indoor grill collecting dust in the back of our cupboards? But there are three tools that I keep coming back to time and time again.

Cast iron pan – I used to be intimidated by this kind of pan. After all, they’re clunky, they look slightly medieval and they seem hard to clean. But after I bought one on sale and realized how many delicious recipes I could make, I was hooked. I was actually inspired to try a cast iron pan after TOPS News magazine ran a pan roasting feature in the February/March 2018 issue. Since then, I’ve made pan-roasted salmon, steak and a mouth-watering chicken parmesan. And I always feel a little chef-like whenever I take the pan from the top of the oven and place it inside to bake.

Vegetable spiralizer – I originally thought this was a gimmicky gadget, and now I’m “spiralizing” just about any veggie I can. I’ve made zoodles (zucchini noodles), cucumber noodles and sweet potato noodles, just to name a few. Veggie noodles turned out to be the perfect companion to the previously-mentioned chicken parm. Food marketers have caught on to the zoodle craze and have begun offering pre-packaged vegetable noodles, but they tend to be pricey and spoil quickly. A small, handheld spiralizer generally runs about $10 and is worth the investment.

Crockpot – Nothing new or fancy here: just a kitchen classic that can have a healthy dinner waiting for you at home. With a little prep, you can have dinner ready for you and your family without that after-work I-don’t-feel-like-cooking feeling.

Now that you know about the kitchen tools I can’t live without, I want to hear about yours! Share them in the comment section below. Here’s to adventures in the kitchen!

23 Responses to "3 Must-Haves for Your Kitchen" 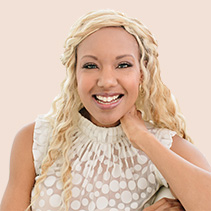