I hope you’ve enjoyed this series, and you’re probably thirsting for more. Yes, this installment of a sense-ble look at healthy living is all about the sense of thirst. I was taught that I needed to drink eight glasses of water each day. However, nobody ever said how big the glass was supposed to be.

I never really gave much thought to how much I needed to drink. I was rarely thirsty. Some people I knew would say they couldn’t drink that much water or don’t have the desire to do so. Some reluctantly conform by using various methods to remind them that it was time to drink. What’s behind this?

It’s natural to seek out water. But if I ignore the feeling of thirst, it will go away. Do it long enough, and the sense of thirst won’t be noticeable. This is because the human body adapts. Think of a time when you put your hand in some hot water. Take it out quickly, put it back in, and notice that it doesn’t seem as hot as the first time. Ignoring thirst over time will eventually diminish the urge to drink.

I’ve turned drinking my fair portion of water into a habit, sort of on the clock. There’s been so much information on the benefits of water, you might say the message gets “watered down.” Easy access to water seems to stem the tide on thirst. Except under extreme stress, dehydration is rarely discussed.

My father worked for the local water district. Sometimes he had to collect payment on delinquent accounts. He would tell me how people complained that the water bill was too high, to which he would reply, “The water is free — you’re just paying for the service.” Convenience comes at a cost, however. If you had told me years ago that bottled water would be so available, I would have told you that you were dehydrated and hallucinating.

With this great accessibility and the proven fact that I can get water from other drinks and foods, it’s no wonder that I really don’t think about being thirsty. Also, I would have to make a conscious effort to drink too much water, which can be just as harmful as being dehydrated.

Despite knowing the benefits of being properly hydrated, consuming diet soda and coffee sometimes replaces my water intake. It’s important to realize that water can come from these other liquids and some foods. It’s all part of the balance that I need to strike for the sense-ble look at a healthier lifestyle.

If I feel a little “off,” I’ll have a glass (bottle) of water before eating anything. I no longer plan to have water only at mealtimes. I make sure that I have water “on the clock” and set my schedule accordingly.

Now let’s get back to those eight glasses. Research states that men should drink 125 ounces of water (15.5 cups) and women drink 91 ounces (11.5 cups). So, those glasses must be eight ounces. However, about 20% of the daily recommendation comes from other sources. Eight is average and needs to be adjusted according to your physical activity, environment, and overall health. I use how much I perspire and the color of urine as an indicator if I’m properly hydrated. (Pale yellow is the desired hue.)

It’s necessary to remain sensible on my journey to a healthier lifestyle. There’s much more that I can share; however, I’ll just leave you thirsting for more. Now, please go have a “glass” of water.

This is part 10 of the multipart series, “A SENSE-ble Look at Healthy Living.” In my next blog, we’ll look at the human sense of pressure.

One Response to "A SENSE-ble Look at Healthy Living: Thirst" 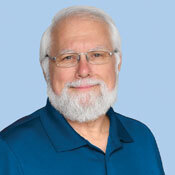